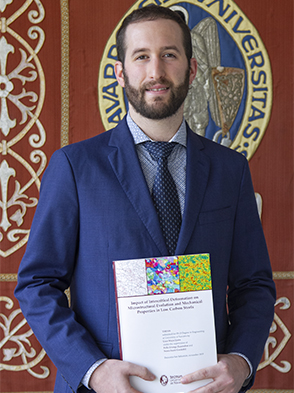 Heavy gauge line pipe and structural steel plates are often rolled in the two-phase region for strength reasons. However, strength and toughness show opposite trends, and the exact effect of each rolling process parameter remains unclear. Even though intercritical rolling has been widely studied, mainly in the 90s, a stable process window can only be achieved by a more profound understanding of the microstructural evolution during the intercritical rolling and its relation with final microstructure and mechanical properties.

This thesis is focused on the analysis of the impact of different process parameters like chemical composition, austenite condition, strain per pass etc. on the microstructural evolution and mechanical properties of intercritically deformed low carbon steels. The present work has been developed in the frame of two research projects: “Impact of two-phase region rolling on the microstructure and properties distribution in heavy gauge structural steel plate” (INCROHSS, RFSR-CT-2015-00014) funded by the RFCS program of the European Commission, and “Effect of deformation in the intercritical region on the microstructure and mechanical properties” (AGINCROLL, MAT2015-6975) funded by the Ministry of Economy and Competitiveness (MINECO).

In order to study the impact of different process parameters in the intercritically deformed microstructures, several thermomechanical treatments were employed. First, with the aim of obtaining a proper austenite status prior to transformation, multipass torsion tests were carried out. This enables the determination of the non-recrystallization temperature (Tnr), which is essential for an optimum austenite conditioning. Following with the trials performed in the torsion machine, single hit rupture tests were carried out with the purpose of estimating the flow behaviour at high temperature. Under isothermal conditions, continuous stress/strain curves were obtained in the intercritical region, together with the ones obtained in the solely austenitic and ferritic region. Constitutive equations were developed to model the flow behavior of austenite and ferrite constituents, which combined with a law of mixture assuming uniform strain allows to reproduce the flow behavior of a two-phase (austenite/ferrite) microstructure.

Concerning the dilatometry study, phase transformation analysis was carried out in order to define Continuous Cooling Transformation diagrams (CCT diagrams). On the other hand, two different thermomechanical schedules were performed with the objective of simulating the intercritical rolling. The first one, was designed in order to study the influence of carbon content and different strain per pass for various austenite/ferrite balances within the intercritical region in two low carbon steels, 6CMn and 12CMn. Similarly, with the purpose of analyzing the effect of the addition of microalloying elements and austenite condition on the evolution of intercritically deformed microstructures, another thermomechanical scheme was designed, where 6CMn and NbV steels were compared. Different ferrite populations are identified in the resulting microstructures for both routes, composed of intercritically deformed ferrite and non-deformed ferrite transformed during final air cooling. In the deformed ferrite grains a well defined substructure is clearly noticed, whereas the non-deformed grains formed during the final air cooling step do not show any evidence of substructure. In the current work, EBSD characterization technique was used to develop a methodology that is able to differentiate the intercritically deformed ferrite (DF) from non-deformed ferrite (NDF). Based on the Grain Orientation Spread (GOS) parameter, the proposed procedure allows distinguishing both ferrite populations and quantifying microstructural parameters of each family accurately.

Finally, the current work is also focused on the evaluation of the relation between microstructure and mechanical properties, and to that end, plain strain compression tests were carried out. The intercritically deformed microstructures were characterized by EBSD technique, following the same procedure employed in the dilatometry study. Later, strength and toughness properties were measured by means of nanoindentation, tensile and Charpy tests. Combining the EBSD discretization procedure and the nanoindentation study, the nanohardness values corresponding to each ferrite population were quantified. Based on the results obtained from microstructural characterization and mechanical property analysis, a further knowledge concerning the interaction between intercritically deformed microstructure and tensile-toughness properties is gained. The yield strength was predicted by the estimation of the contribution of different strengthening mechanisms (solid solution, grain size refinement, dislocation density) corresponding to each ferrite population by considering a nonlinear law of mixtures. Similarly, the impact of different microstructural parameters (solid solution, grain size, microstructural heterogeneity, contribution of dislocation density, secondary phases) on toughness was evaluated and a new equation able to predict DBTT was developed for intercritically deformed microstructures.

In the frame of this thesis two papers were published in international journals (JCR-Q1), (“An EBSD-based methodology for the characterization of intercritically deformed low carbon steel”, Materials Characterization 2019 and “Interaction between Microalloying Additions and Phase Transformation during Intercritical Deformation in Low Carbon Steels”, Metals 2019), together with 7 contributions to different national and international conferences. Furthermore, the technical report regarding INCROHSS, RFSR-CT-2015-00014 project will be published during 2020.