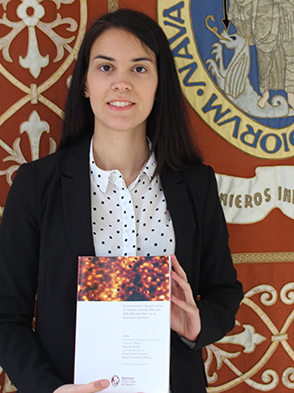 Title: Electrochemical characterization of ionogels with Au-IDEs and AZO-IDEs and their use as functional materials

Ionogels (IOs), ionic liquids (ILs) immobilized in a matrix, have received a growing interest during the last decades. ILs present interesting properties such as suitable conductivity, negligible volatility or non-flammability. Interestingly, IOs maintain these characteristics in a quasi-solid state enabling their use in sensors, batteries or electrochemical double layer capacitors. Special mention deserves IOs with a stimuli responsive matrix. Those materials respond to external stimuli changing their physical properties without the need of external power. Therefore, they have become intriguing materials for drug delivery systems, artificial muscles or micropumps in microfluidics. In the literature, the electrical and electrochemical properties of IOs are well characterized when used as sensitive layers for sensors and electrolytes. However, a gap in the electrochemical characterization of stimuli responsive IOs when used as actuators has been found.

Among electrode materials for electrical and electrochemical characterization, indium tin oxide (ITO) is a commonly used material for transparent conducting electrodes (TCEs). However, ITO presents several drawbacks, such as, toxicity, poor adhesion to polymeric materials or low availability. Aluminium doped zinc oxide (AZO) has emerge as a promising alternative for ITO. Moreover, AZO films present a resistivity and optical transmittance comparable to ITO. Atomic layer deposition is a suitable technique to fabricate AZO films with high precision in thickness. In the literature, several works about AZO film deposition and characterization can be found but none about its patterning and use as TCEs when deposited with atomic layer deposition (ALD).

Firstly, the electrical characterization of the two IOs and the corresponding pure ILs was carried with Au-IDEs. The observed current induced rectification behaviour in the I-V curves widens the knowledge about IO and Au electrode interfaces. Their stability against oxidation and reduction processes and the effect of the absorbed atmospheric water was studied by cyclic voltammetry. Moreover, the actuation behaviour of the thermo-responsive IOs was investigated by electrochemical impedance spectroscopy (EIS). The nature of the IL and the microstructure of the polymer matrix was correlated with the fitting parameters from the EIS spectra providing a better understanding of the actuator behaviour of these materials.

Furthermore, a combination of ALD and photolithography was applied to fabricate interdigitated electrodes of AZO embedded in polymeric substrates. A methodology, which is a breakthrough toward ultimately thin devices fabrication. The fabricated AZO-IDEs were used to monitor conformational changes of IOs. The results showed the suitability of the use of the fabricated electrodes to monitor changes in ion motion and morphology of stimuli responsive materials.

Finally, for the seeking of new applications of IOs, their implementation as sensitive layers for gas detection was evaluated. Their response towards benzene and formaldehyde, two carcinogenic air pollutants, was successfully evaluated.